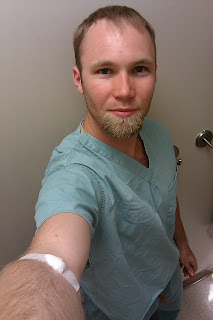 Yessiree, it's me again.

Yesterday involved a rocket-run back to MD Anderson for the last piece of the diagnostic puzzle for now (Lord-willing). That MRI that's been talked about everywhere (aka, this blog) finally happened.

At my very first MRI I have to say it was pretty much what I was told it would be and aside from my arm falling asleep on a first pass and my neck cramping on another, it was pretty cool. There was the jackhammer, the nuclear meltdown warning honk, the whale song clicks, and what I think was the machine playing duck-duck-goose without ever getting to said goose. I got in at 4:15p to check in and by 4:30p they had me in scrubs and waiting to get the IV line in. I lost track of time after that because of all the magnetic stuff going on, I couldn't bring my phone or watch with. National Geographic is an awesome magazine by the way. It'd be fun to get some photos in there actually. Perhaps I'll get to working on that...
Anyhow, I finally got called in and got to see the machine. This one was actually open-ended to load either way which is a little different that I'd expected but nice. The doc/tech wound up trying a couple different positions before I wound up lying on my left side with my arm out in front, sort-of superman style. They had my hand on/in some sort of cupped contraption at first and it wound up not working (was told it was fuzzy) after who knows how long. They stuck it in-between two plates for what I'm guessing actually worked. :) Afterward while waiting for the IV to be removed I had some quick but good conversations with some patients who were about to go in for their MRI. Good times. I was back in my own clothes by about 7:30p or so and then it was time to head back to ye olde Austin.

Oh, and before I forget, I got copies of the CT, x-ray, and ultrasound tests which are pretty cool to look at, not that I know what to look for... 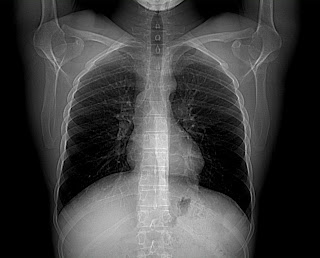 This chest x-ray is the inspiration for this post's title. It is not of me surrendering, the radiologist just told me to lift my arms is all. :)

So now we wait. As mentioned in the last post, they probably won't have anything for me until late this week so life goes on. I know I've said it a lot but the toughest part of all this really is just not being able to plan with any amount of certainty. I suppose it's for best and really, I've never been big on planning anyway. I've always known life to be unpredictable and while there might be a direction you're going, you might have to switch a couple lanes along the way. Hopefully everyone else's week is going well? :)
Posted by Eric at 3:05 PM