Finally, something I can't do. It's about time.

Well it's been weeks since I posted because life has been getting back to normal and I suppose that is a good thing. I've been drumming, been painting, been photographing... Shoot, I've even been washing dishes and doing laundry again. I was getting tired of having to take Axe (body spray) baths to keep my clothes from making it seem like I was also not showering. Yes, that was a joke... :)


Amidst the healing and rehabilitation, which I'll get back to in just a minute, I've been able to explore more thoroughly this new reality I'm living. In that process some things have presented themselves as goals to strive towards, like building grip strength, and other things that might be the first real disability I've been able to identify. 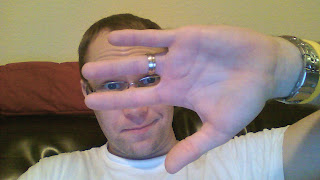 It was probably first a blip on the radar while in the shower getting ready to shampoo my ever-more-sparsely-populated hair. It really became noticeable when brushing my teeth. It relates to a question you may remember I'd asked some time back before the surgery about the effect on surface area the finger removal would have. I'd been concerned that it would detrimentally affect my ability to swim in a straight line. The answer was that aside from the finger itself, the palm surface area should only shrink about a centimeter which turned out to be correct. The caveat to that is in the spacing of fingers, in part due to the lack of change in width of my palm. While my pinkie and ring/new-middle finger come together about as well as they ever have (as far as I can remember), my index and new-middle don't and that creates a bit of a gap to allow things to fall through. I felt shampoo slipping through my fingers in the shower and while attempting to cup water to rinse after brushing, I found it an exercise in futility when using only my left hand. To a lesser extent, taking change from drive-through windows also left me less than confident in being able to ensure I don't drop any coins. And there you have it. 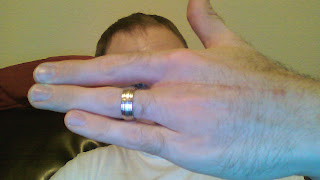 All told, not a huge deal at all but it is what it is. Truth be told, after staring at my hands for what amounts to hours on end (collectively), the five fingered hand looks overpopulated and abnormal. Crazy I know but it may also have to do with the excessive amount of animated entertainment I've watched. It has been noted by a few friends that Simpsons, characters, among others typically have 4 fingers and as such I'm arguably in good company, or just company at the least. :D

The issue with gloves has been much of a non-issue for the most part so far. The solution has either been to simply load the sleeves with the appropriate fingers and leave the middle un-inhabited or to tuck it into the glove. Both options are largely acceptable for all purposes so far.

With regards to occupational therapy, I've been going for a while now and am actually probably nearing the end of my sessions. I'd been going twice a week and a couple weeks ago that was cut to once a week. On a visit this last Thursday that got cut to every two weeks. All areas of the incision are fully closed and the scar is smoothed out pretty nicely. While typing this up I'm yet to take updated shots of this hand showing the significant progress that has been made but I'll get that fixed up before posting.

The next round of routine tests to make sure the cancer is gone have already been scheduled and it looks like they have me on a rotation of the most expensive and intrusive tests. I'd had an MRI right before surgery, the first post-op appointments had a CT scan, and this next appointment I'll be getting an ultrasound in addition to the routine bloodwork and x-rays. My health insurance is grateful they're not doing MRI, CT, and ultrasound every time I'm sure. Heck, I'm glad.

The phantom finger has become a largely controllable phenomenon for me which makes me a blessed guy judging from some of the horror stories I've heard about phantom pains of others. The recent cold weather seemed to cause it to flair up a bit more but each time I feel it coming on, concentrating on the present fingers and moving them seems to dissipate that feeling quite quickly. It's somewhat fun to be able to turn it on and feel that sensation of pressure and tingles when I try to engage the missing digit although it seems somewhat risky to entertain it too much. Might the sensation stick and I lose the ability to turn it off? Will I lose that sensation altogether in time? It's hard to tell what would be the desirable outcome. Holding on to something that is gone has such a bittersweet and at times vastly deep impact on a person's psyche. That seems to be true of my finger but also, according to my observation, in death, lost opportunities, and even just not seeing friends for long periods of time.

The more I've thought about this experience, the more it seems I've been prepared for it. The observations mentioned above have come from personal and second-hand experiences. Moving around and not seeing close friends for long periods of time emulates death to a degree, having some opportunities come and go, some in very distressing fashion also emulate the same emotions and similar repercussions. Having faced a number of these types of situations, a degree of numbness that formed due to the previous experiences helped buffer the blow of what could have been something that would have stung sharply. It's good to know that in the middle of the hurricane of seemingly nonsensical pain and change that God has ways to weave a silver lining that actually overcomes the cloud itself. It seems like that's always the plan.

There is a sweetness to suffering, not that I know it all that well. The stuff I have gone through provided enough of a glimpse that I think I've got a decent idea of it though. There are great times and there are tough times, there's room for it all.


All that about troubles and ups and downs reminds me of something...

In a recent conversation the concept of karma came up from an individual who was expressing his diminishing belief in it. The whole concept of things coming back to reward or condemn deeds is attractive because of it's proximity to the truth. However, at the same time, its distance is noticeable and reveals itself in time through experience. My personal belief as a subscriber to biblical doctrine leads me to belief in reciprocation of deeds to an extent but via the hands of God and not necessarily in my lifetime. While good or bad deeds may or may not be judged and acted on within the course of any affected party's lifetime, the consequences of actions are always dealt with. The difference between what I believe and karma is that it doesn't matter whether I experience the effects of it. I simply trust God will judge and enact justice and mercy as He sees fit. Given that He's far more capable of handling things than I, it's a good and comforting thing to be able to rely on that and just work on our relationship.  Of course this is a tough thing to get into with someone who doesn't share the same beliefs but it rings true to me.

I don't know why that came up but it did. Oh, lookie there, it's 2am... that explains it.
Not to negate those preceding thoughts but I think late night blogging is similar to dreaming which is often acts like one of those warehouses that wreckage is dumped in to be sifted, sorted, and re-assembled to make sense of it all. Blogging tends to be more coherent as it is done with all cognitive functions while dreaming trends to the more bizarre. Nonetheless, with both you wind up with piles of thought that are sometimes related and sometimes not all in the same arena. So there you have it, goodnight. :D
Posted by Eric at 6:40 PM 4 comments:

Two things happened this morning, the 51st day since the surgery: #1 was that I set up my drum kit and played it for the first 9-fingered time. #2 was I was able to clip my fingernails normally without having to resort to wedging the clippers between my knee and left wrist to get the needed torque. So yeah, it's been a pretty good day. It really is the little things...


My ring finger is still the one that needs the most work to recover it's mobility and really it might very well need to exceed it's former benchmarks given it's former neighbor finger is no longer with us. the surface is healing up nicely but the internals are still probably about three-fifths healed. Gripping the drum stick with that hand, while possible, didn't feel completely natural although I can hardly complain. It was the 1st time to try playing and the 2nd time I tried holding drumsticks post-op. It is a start and that's what I was shooting for.

Macy, my occupational therapist, actually did assign me that project (drumming, or trying to at least) as part of my therapy as we try and figure out what I am having trouble doing that I'd normally but up to. That will give us things to focus on and work towards. At the moment I'm working on scar-management and range of motion through everything from massage to squeezing and working thera-putty. Good times.

I'm trying to get back to normal except that normal isn't normal. At the beginning of all this I was just setting out as a self-employed artist/photographer and a lot was still needing to be learned and set up. I'm still trying to get my financial records in order and still trying to figure out my primary concentration. Business has been steadier than it's ever been though it will constantly need to being growing to actually make it to a point where I have a proper salary. But that has nothing to do with cancer and little to do with the recovery process so I'm shutting up about that now. :D

The next period of "Eric with a C" is going to be monitoring to hopefully confirm that the surgery was successful in cutting off the cancer before it got anywhere else. Aside from the quarterly checkups I'll need to go in for, we're also taking advantage of the MDA resource to get checked for any skin cancer since it's just smart to do so. There's no reason to think I have it but whenever you get one type, it just seems like it would make sense to make sure there's not some other lurking around the corner. If there was hopefully this would help nip it in the bud.

So there you have it, that's what's going on. It's a brand new year, the year of the 9 for me, it's kind of like a new type of birthday without all the cake and presents. Here's to new challenges and new opportunities to keep us busy and out of trouble!
Posted by Eric at 11:18 AM 1 comment: