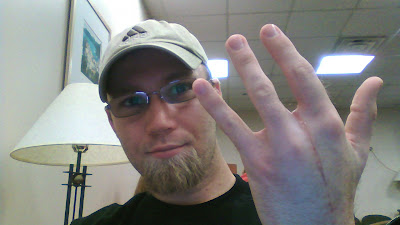 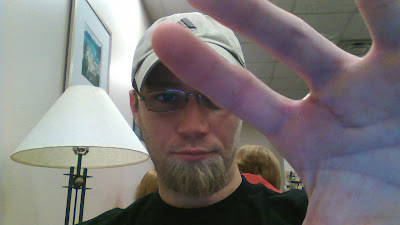 has definitely been a while since I've had the time to sit down and write about what's been going on which is a pretty good indication of how things have been going.

December has seen an art show, an assignment shoot, a portrait, a wedding, a bunch of church events and friend get-togethers and frankly, the hand hasn't been much of a hindrance which is fantastic! The phantom feelings have subsided as a pervasive experience and now are more of an occurrence when I try to make a fist or am doing something that normally would include that finger. Just the other day I was holding my phone to my ear with the left hand and it seemed like the missing finger was holding it at the top to stabilize. Madness.

Occupational therapy has started and is going well. Macy, the therapist , is a fun torture artist that's been taking care of my gimpy finger and hand and that deserves further explanation.
It all started out with a look-over of the situation. My hand was pretty stiff, the pulled-together skin where the stitches were was scabby in some places and soft others, and my upper palm was crazy sensitive. There were tests on current flexibility forwards and backwards and all that, but it turns out OT also involves scar management. Apparently that involves digging out scabs so tissue can grow together deeper and move up to the surface. Given my hand was essentially split open, it goes pretty deep. Of course they stitched it together inside as well but the surface scabs apparently went down a few millimeters as well in some places. That had to get dug out if it could. That was not fun.
For added emphasis, that was not fun.
But Macy digs it. Pun intended. Now she may "like" it in the sense that she has to do it and therefore is using the power of positive thinking in the same way that I using laughing while having tweezers poke and pull at super-sensitive areas. In any case, in one of the first couple sessions she got to cleaning up the incision areas and it was far from pleasant. Oh the company was fine, and afterward it was fine, but... well I've already made my point.

The cool thing is that it works.

The hand is much more flexible, the incision is healing up really well, and the sensitivity has gone down drastically. I still get what feels like an electrical pulse up the phantom finger whenever I press into my upper palm around the cut line but that is entirely tolerable and either I'm just used to it now or it's not pain. 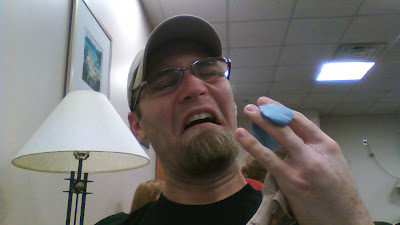 So I'm wearing some tape and what looks like blue silly tack most of the time these days to massage the scar and keep it from bunching together which would look bad and limit movement. I'm also wearing a splint of sorts during the night to help bend back my fingers to improve flexibility there. Lots going on. (PS. Just noticed that spacer/massager smells terrible now that I've been wearing it for a few days. See image to right.)

Today is the first battery of tests at MD Anderson since the surgery and so far I've already breezed through blood work and my hand and chest x-rays. Currently I'm awaiting the CT scan, and then... well then I can eat. I'm starvin' here. Pro: All tests and meeting with the doc on one day. Con: Had to be here at 7am. Ok, there's another pro... Chris & Courtney were awesome yet again and let us drive in last night and crash at their place which is a very doable 10 minutes from the center. In Houston traffic that's amazing. Shoot, in most places that's amazing. :)

So yes, I should be getting called in to get my IV started sometime soon-ish, then a little later I'll get called in to actually get scanned. Hopefully all this will reveal things are hunky-dory and we can go on our merry way. Could this be Eric without a "c"? Could this blog title be erroneous? Am I now a liar? A seller of counterfeit wares? Hopefully... In this case anyways. :D
Posted by Eric at 5:43 AM 2 comments: