I've been called indecisive before... 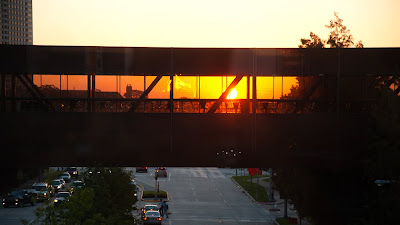 I got a call from Dr Lewis again on Thursday afternoon and she let me know that after that
review back on Tuesday they're still not 100% what to call my sarcoma, other than sarcoma.
She said it showed more of the characteristics of low-grade sarcoma but apparently was throwing them for a loop on the precise diagnosis. In retrospect, I should have asked what characteristics made it so ambiguous but I should be able to call back and ask.

But here's the kicker: I apparently have two options for treatment at this point with a third that is often suggested by us non MDs but probably better in theory than actuality. It sounds like the Dr Lewis was still leaning towards just doing the ray amputation because it's the safest option overall in regards to cutting off (no pun intended) the source of this low-grade(?) but still nasty cancer.
However, she did say another option at this point would simply be "close observation" which I suppose is a fancy way for saying "wait until something bad happens somewhere else or it looks like it's re-growing." The downside to this option would be a heightened chance that it could metastasize elsewhere to a place much more vital than my middle finger. Now I don't know how close this observation would be and whether it's worth it to risk it but the interesting thing is that she listed it as an option.

The third option that Brea asked me about was this: Couldn't they just try and clean up the area and get clean margins? ...And the answer to that is most probably no because frankly my finger doesn't have all that much too it. Add to that issue the concern that digging around there could stir up the bad cells and actually cause it to spread, which kinda defeats the purpose.

I'm not much of a gambling man but I like taking calculated risks every now and then. With that being said, I don't like being overtly stupid regarding serious matters. But here we are with a choice. Dr Lewis said we could give her a call back in a week or so and let her know what we'd like to do.

It is clear that a ray amputation of that finger is the preferred treatment largely because it is the safest known option with the largest probability of stopping this cancer where it began.

The thing is that good news has been coming in and frankly, I know that this could be an opportunity for the cancer to just miraculously go away, but I also know you don't test God. I trust He could do anything really, but the question to me is whether or not the best path is making use of the amazing structure of capabilities provided through the medical complex or if it would be something else entirely. Right now I'm leaning towards doing the surgery because we're in a place where it is an option and dealing with the adversity it brings up is an opportunity to genuinely show that I've got hope beyond the physical. Whatever happens, it's all good and I know things could go a hundred different ways and I'm cool with that. Shoot, maybe they'll take it off and it'll show back up in place when the bandages get taken off, that'd be an undeniable shocker. :D

So there you have it. Call it "Decision 2010" and let the games begin. Should I give cancer the finger and walk off for the better or hold out for something else? Either way it could be a moot point and I could get caught up in a freak gasoline fight accident and the eugoogely might not even mention cancer as the cause. Yes, that was Zoolander, I'm sorry. I don't know what's going to happen but we'll have some fun any which way this story takes us. :)
Posted by Eric at 1:24 AM