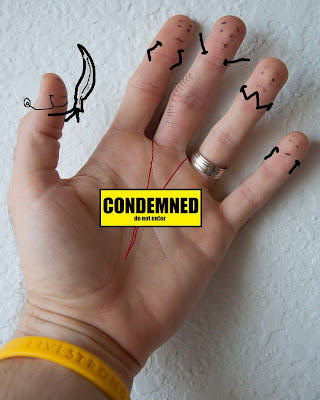 I'm a little late in posting this but here's what's been going on...

Those questions that we've been compiling were mostly answered back on Monday afternoon when I was able to talk with my doc on the phone.

The bottom line at this point is that what I'd suspected and been preparing for (the finger being taken off) is the consensus not just with Dr Adler and Dr Lewis, but with every other person with cancer experience that has been asked. I'm blessed to have very gracious and concerned friends and family who have made inquiries all over the place to see what other professionals and friends with experience think and all the replies have confirmed that taking off the primary location of the cancer offers the best chance of killing the disease before it gets out of hand. With that being said, of course there still aren't any guarantees, just probabilities. It's a somewhat somber reminder that despite all the stunning advances in medicine and science, there is still a whole lot we don't know about the human body. It's all based on experiments and practice and typically life throws curve balls because we just don't appreciate the complexities of our "normal" lives.
Right now I'm envisioning Sean Connery saying something along the lines of "Ha! You think you're so smart!"

Anyhow, I got off topic a little bit, sorry about that!

Questions and Answers
(I made notes, then came back and filled in with more complete sentences. The Doc talked really quickly... :D
1. Since we know the margins were not clear but the cancer has been down-graded is radiation on his finger a possible treatment to kill the remaining cells if we decide not to do the radial at this time? Is removing additional tissue but not the whole finger an option at all? (This one I know has been answered and I personally don't prefer it)
No, there isn't enough tissue, radiation is not an option. The pathologist conference concluded I am not a radiation candidate. Apparently it would just "fry" the finger and kill it.
2. Is there a likelihood of phantom pain? Or chronic pain in his hand?
It is not likely and is even less likely with a ray amputation.
3. In low grade sarcoma what is the recurrence percentage in other patients when initial site is not completely removed?
When the original site is not removed, recurrence is about 90% and tends to be either in the original site or the lungs.
4. Since it is considered a less aggressive cancer does that mean it is not as likely to metastasize?

It is not as likely but is still likely

5. If the ray amputation is done will other treatments also be necessary? Radiation, chemo?
No, not at this time. (Would change if cancer popped up elsewhere presumably)
6. Can we have the lower half of his body checked to be sure he does not have the misfortune of having another growth in a place that we have not looked at yet?
No. Apparently it would be in the lungs or in the finger if anywhere else.
7. How long would the surgery be?
About 2 hours.
8. How long is the healing process?
I should be able to get the hand out of the splint and move it after 2 weeks. It should be mostly functional at 6 weeks and fully functional in around 3 months after surgery.
9. The cancer was in his finger for over a year without spreading, what is the likelihood that it will spread now that the tumor was removed but the margins were not clear?
The likelihood would be low because it is low grade and the tumor was small but there is a chance. Usually a spread comes from a large tumor shedding off cells when it reaches a certain size.
10. Is there any reason radiation or chemotherapy isn't an equally viable option at this point while there are only small clusters of cells (presumably)
See answer to question #1
11. What is the stage of the tumor that was removed?
It is not relevant because it was a low grade tumor and there was no metastasis visible at this point.
12. How possible is it that it has already spread since it's been over a month since the initial tumor removal? How might that affect the treatment plan?
At this point, while it is possible, it's not very likely and as such, would not affect the treatment plan which is ideally removing the finger.
13. What is the recurrence percentage when the initial site IS completely removed?
Very low.
14. Would the "watching closely" include MRI, CT scan, chest xray, ultrasound, and bloodwork every 3 months? My understanding is that this would be the same with or without the ray amputation. Are there any more or less tests that would be involved?
I've already had an MRI (baseline MRI) so the watching closely would probably be just the ultrasound and chest x-ray every 3 months. No other tests would be prescribed at this point.

15. If taking the finger didn't close the gate, metaphorically speaking, what would the likelihood be that if it has moved up that you'd recommend taking more of my hand or arm, etc?
It is unlikely at this point because if it did wind up moving elsewhere, just about anywhere else there would be able more tissue to work with and complete removal isn't necessarily necessary.
Other things mentioned in the phone call:
If we sat and watched it, there is a higher risk of recurrence because the initial tumor removal was done improperly. Recurrence usually happens within 2 - 3 years and if nothing shows, one is usually cleared by the 10 year mark.

The next step is to contact the scheduler to setup the next appointment depending on our choice.

So I think I'm out of excuses for not scheduling the surgery. The main concern I have at this point that might be legitimate is the lack of a full body scan. Dr Lewis has been very clear that the sarcoma wouldn't metastasize anywhere lower without being in the lungs or lymph nodes but I still feel (possibly incorrectly) like she's not getting the concern that there may be something that just is/has-been growing somewhere else entirely and separately. Is there any reason why something like that wouldn't happen?

Anyhow, so for halloween I'm thinking I'll dress up like a UPS or USPS delivery guy with a box being sent to cancer and with a bloody finger inside. :) Also, projects like making some left hand prints and or some casts might be in the works just for the fun of it but who knows if I'll have time for that.

Thanks for all your prayers and encouragement! There have been times where I could feel some negative stuff trying to creep up and distract me from the big picture but it's being beaten back 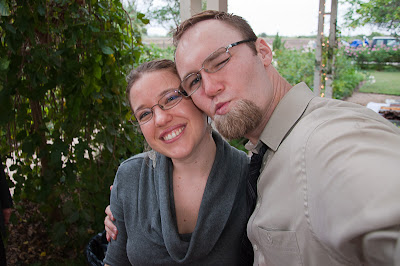 and I'm sure your interventions are playing a role in all that. I can't say I deserve any of it because I don't but it is very much appreciated!

Oh, and one other thing, I'm really glad we were able to get out to Brenham this past Saturday to shoot Ashley & Dusty's wedding at a beautiful rose garden. Good times and BBQ!
Posted by Eric at 10:18 AM