Interesting factoid, for those who are curious, one can swim straight with two disproportionately sized hands. I'm not sure about the physics of the matter, perhaps I was able to auto-correct like an airplane down one engine, but I was able to swim freestyle yesterday afternoon and even stay in my half of the lane. 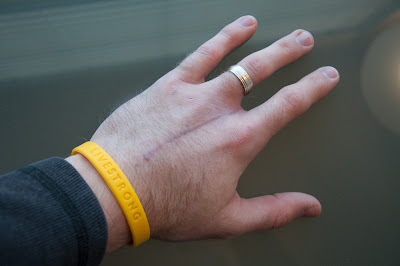 Yesterday marked the first major attempt at proper normal exercise since the whirlwind of the surgery and recovery. Sure I'd been able to play the drum kit and hand percussion, help move and carry things, and hike in to a campsite with loads of firewood and equipment, but nothing like trying to swim straight laps. It's a good thing to be sure since I was feeling pretty out of shape by my standards. It doesn't help to be out of sync with normal athletic activities and turn 30 all in the same period. But this is promising, I was actually concerned about my ability to swim and it now appears my primary hindrance is stamina and cardiovascular conditioning as opposed to the more tempting scapegoat of a missing finger. Darn.

The phantom lives on by the way. I even tried to work it into a campfire ghost story but it was not a well thought out story and some of the younger audience weren't following at all. Really it's probably for the best. The actual phantom activity is mainly presenting in tingles and mental lockups whereby I momentarily feel like the other fingers can't move because the missing one is stuck. It is still quickly resolved with a thought but I'm going to need to make sure it doesn't slip out of control. There is also still sensitivity in the area the nerves were severed. Distributed force in the palm isn't a problem but if I clap incorrectly and hit that spot it can become quickly sore or at least undesirable. I think I need to keep up with some of the stretching exercises I'd been given in OT too, there is a little tightness in the hand.

Much of the recent discomfort seems attributable to all the activities and strains the new version of this left hand is experiencing for the first time. Hopefully they're growing pains and it's muscle and tendon growing and healing further. Good times.
Posted by Eric at 10:34 PM