My two cents are on the ground at McDonalds; the one at Austin's infamous "Y." 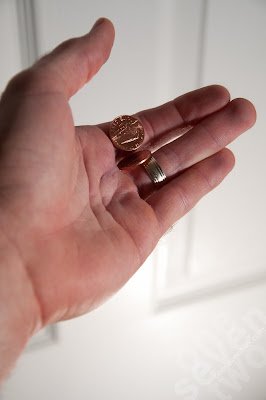 Because there's a gap in between my fingers on my left hand that just doesn't close tightly. While this is the first actual incident of this sort, it was anticipated. It will probably happen again too. It's the sort of thing that just does and unless I move back to a country where the driver is on the right side of the car, my left hand will, more often than not, be what is reaching out of the car at drive-through windows for change, ketchup, sugar, etc. Coins are sure to be falling for years to come, I just hope it doesn't exceed two cents an occurrence.

Those two cents are still lying on the ground at that drive through as far as I know. I used to collect pennies because they were usually what a kid could find on the ground and unclaimed. Now they apparently cost more to make than they're actually worth as currency. Don't get any ideas about selling the monies for material, I'm pretty sure that's still a federal offense...

That reminds me of an article I read recently about how it would save the US government tons of money to switch to dollar coins entirely, but that's something that would better be discussed on my other blog, News/Reviews/Opinion.
Posted by Eric at 12:03 PM